In an effort to drive revenues higher, we will see significant increases in global oil production in the coming year. According to the US Energy Information Administration’s Short-Term Energy Outlook, worldwide crude oil prices will average $61 a barrel in 2019 and $62 per barrel in 2020. The estimate is $11/b lower than the EIA prediction just three months earlier. Meanwhile, the gas market is expected to remain steady, albeit with seasonal takeaway constraints which depress pricing.

One of the most important goals for upstream companies, given this scenario, is to optimize the end-to-end supply chain and drive EBITDA improvement and cash generation. At the same time, they will need to mitigate the risk of disruption and price increases which may occur as a result of international sanctions, constraints or tariffs. For companies seeking to drive additional efficiencies and realize between 10-25% incremental improvement on margin/barrel, the key focus areas are procurement, operations and logistics.

As executives focus on growth and recovery, digital technologies will become critically important for improving productivity and efficiency and to mitigate higher costs. For example, seismic imaging, which is a core part of exploration, is a process already rooted in data analytics and 3D visualization models.

Exploration and production (E&P) companies moving into the next generation of seismic imaging are experimenting with 4D models that integrate production data to map changes in reserves’ oil and gas levels. These advances aim to more precisely pinpoint the quantity of resources and the lifespan of each well, in addition to optimizing well interventions.

3D printing, also called additive manufacturing, is increasingly becoming more prevalent in upstream, as companies seek to drive production costs down. The oil and gas industry has speculated about the application of 3D printing for quite some time, with suggestions ranging from drill bits and perforated pup joints to complex pump housings and heat exchangers. However, the technology has yet to integrate into the industry’s manufacturing completely. 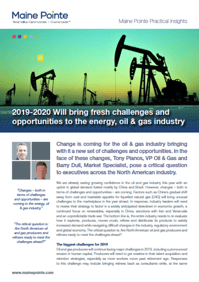 Total Value Optimization™ (TVO)  is achieved when an organization is dynamically able to anticipate and meet demand through the synchronization of its buy-make-move-fulfill supply chain to deliver the greatest value to customers at the lowest cost to business.
> Learn More

Our engagements deliver between a 4:1–8:1 ROI. We provide a unique 100% guarantee of engagement fees based on annualized savings.
> Learn More

Have a particular business challenge you would like to discuss? > Contact us to talk it through with one of our executives.